In 1978 Bob Chinn and his daughter, Marilyn, began to travel around the country doing research for the Midwestern seafood restaurant Bob had envisioned for some time. After years of planning and development the father/daughter team negotiated the purchase of a shuttered building on Milwaukee Avenue in Wheeling.

The 175 seat “Bob Chinn’s Crab House” Restaurant opened two days before Christmas in 1982, and was an instant success. In the late 80’s, Bob Chinn’s opened additional seating on the porch and eventually became a 650 seat restaurant. Currently in the top 100 grossing restaurants in America, Bob Chinn’s has become a restaurant industry icon by providing the freshest food at great prices. This freshness, teamed with quick service and cook times (almost every item can be prepared in 15 minutes or less), means that Bob Chinn’s doesn’t have to sacrifice quality for quantity. Serving almost a million happy customers a year requires a delicately balanced dance between food purchasing, preparation, and service that Bob Chinn’s 320 employees perform day in and day out. 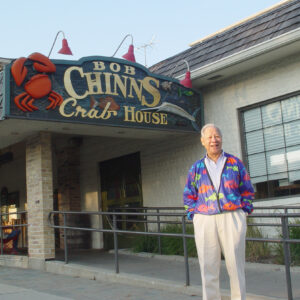 Bob Chinn was born in Duluth, Minnesota on March 2nd, 1923 – the 3rd of 7 children. His parents, Wai and Yung Shee Ong Chinn, were immigrants from the Chinese city of Toishan. After a short stint working at a California laundry, Bob’s parents moved to the Midwest and entered the Chinese restaurant business.

As a young boy Bob moved to the north side of Chicago, just 2 blocks from Wrigley Field. His parents owned the popular Uptown restaurant called “New
Wilson Village”. Bob had plenty of opportunities to learn about the restaurant business as a youngster helping out at the family business.

His favorite childhood memory is of the Depression Era when his father lost his businesses and got to spend all his time with us. Bob developed a fondness for baseball in general, and the Chicago Cubs in particular, around this same time. His love for the game has not diminished through the years. He unwinds by watching the games or going to the racetrack for horse racing. Bob is also a voracious reader and enjoys films and live theater.

Bob’s first job was delivering Chinese food on foot at the age of 14 for another Oriental restaurant. He left high school and joined the army during World War II. He served for 3 years outside of Belfast, Northern Ireland with the 46th Field Artillery Battalion.

When a serious fire damaged his parents’ restaurant, Bob bought the slightly damaged kitchen equipment and started up his own carryout business. The “Golden Pagoda” was in Evanston near the Coronet Theatre. Three years later Bob and Jean moved the business to Wilmette opening the “House of Chan”. Bob left the “House of Chan” in Jean’s and Brother-in-law, John’s, capable hands in the 70’s in order to open the “Kahala Terrace” with his brother, Wally. Although successful in this venture, Bob found he needed a new challenge.

In 1978 he and daughter, Marilyn, began to travel around the country doing research for the Midwestern seafood restaurant Bob had envisioned for some time. After years of planning and development the father/daughter team negotiated the purchase of a shuttered building on Milwaukee Avenue in Wheeling. The 175 seat “Bob Chinn’s Crab House” Restaurant opened two days before Christmas in 1982.

There have been many successes and changes since that time. The restaurant has expanded and grown to be the 4th top grossing independent restaurant in the United States, with 21 million dollars in sales, serving close to 1,000,000 guests in 1996, and employing more than 370 workers. 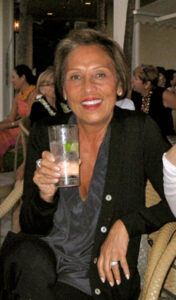 Marilyn Chinn LeTourneau got her start in the family business at a young age. As the second born child to Bob and Jean Chinn, Marilyn soon discovered she had a knack for taking orders- carry out orders, that is! Throughout elementary and high school, Marilyn was peeling peapods, folding wontons, packaging orders and answering phones for the Chinn’s take away restaurant. Bob developed a catering business, specializing in Hawaiian Luaus. Marilyn packaged the whole party for clients. From the food, servers, and tables to Hawaiian entertainment.

After a few years of college in California, Marilyn returned to Chicago to help her father and uncle with the opening of the very popular Polynesian themed restaurant/bar “Kahala Terrace” in Northbrook. But it was only a matter of time before Bob and Marilyn needed a new project – a new concept entirely: a fresh seafood house in the Midwest. They traveled up and down the East and West Coasts, even visiting Hawaii to gather ideas and refine their plans.

On December 23, 1982, Bob Chinn’s Crab House opened its doors, with a hand-written menu featuring 25 items. Now, well into their 35th year, Bob and Marilyn’s seemingly improbable dining idea serves more than 700,000 meals annually and has a staff of over 300!

Business has not been Marilyn’s only success either, as she has been married for 41 years to Edward LeTourneau and together they have two daughters, Carly and Maile.

Stay in the loop on the latest specials, events and more.